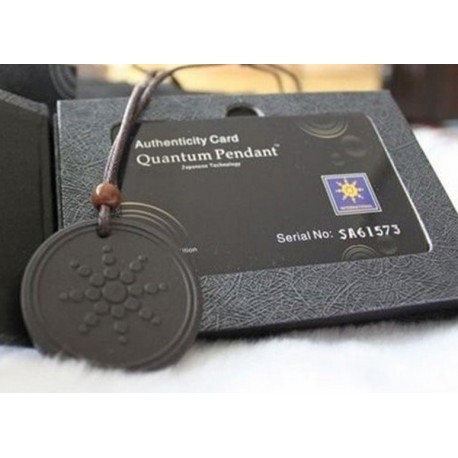 Crystal Quantum Pedant BIO DISC is an extraordinary product. This is very strong antyradiator which actively tones our biofield and reinstates natural harmony to the organism. It was made due to the newest nanotechnology achievements. It is connection of over 70 minerals volcanic origin, tourmaline and germanium at the molecular level. The health and good feeling depends on harmonious and fettered energy flow in a human body. This knowledge has been known in the ancient cultures like India (called PRANA), China (QI), Polynesia (MANA), Japan (KI). Today quantum physics confirms its working! The most notable scientists like James Maxwell, Nicola Tesla or Albert Einstein were interested in scalar energy. Researches prove that it activates our cells energy, makes them stronger and harmonizes biofield. It works like a bio-feeder and removes effects of bad radiation.

All the features of the Quantum Pendant come from the integrated working of the scalar energy, infrared radiation and negative ionization. The impact of BIO DISC was described by John G. Florendo.

Medallion QUANTUM PENDANT emits from 6500 to 8000 negative ions. This is possible because of using unique technology connecting minerals at the molecular level. In its composition are among the others tourmaline and germanium known from their amazing features.

Germanium - it is a seldom and expensive chemical element. It is nit only a great semiconductor, but also has amazing cure features. It gives you better oxygenation at the tissues level, stimulates immunological system and reduces blood pressure.

Tourmaline - it is a valuated semi-precious stone. Put at the body warms up and emits negative ions and infrared radiation. That's why, it is a natural antyradiator and works very well and the human body.

Buying our product, you get a natural, personal antyradiator that strongly protects, regenerates, harmonizes and energies you.   Its working is term less it doesn't die and you don't have to clean it up. An infrared radiation emitted by the medallion broadens capillaries, correcting blood circulation. It gives you better oxygenation and facilities the absorption of nutrients and helps remove the toxins from the body. It stands for evenly warm circulation and boosts the flexibility and mobility, nullifying stiffening and aches.

Our body needs natural negative ionization which is emitted by nature. In the wood or near sea are distributed about 2000-3000 negative ions at cubic centimeter. Near a waterfall or directly near a storm their amount can raise several times. We feel crisply then. Researches confirm negative ionization buoying and the living organisms.

Today, we live in the plus ions superimposed environment made by harmful electromagnetic waves radiation. Pervasive WiFi, communications system, energy saving bulbs, electric lines, electric devices - all of these emits lots of plus ions which have negative influence at general sensation and human health.

You can wear a medallion on your neck (under your cloth, medallion should touch your skin) or in your pocket. At the beginning you can feel strong energetic agitation. That's why, you should gradually lengthen the time of wearing until you use to its high vibration.

There are no contraindications in usage.