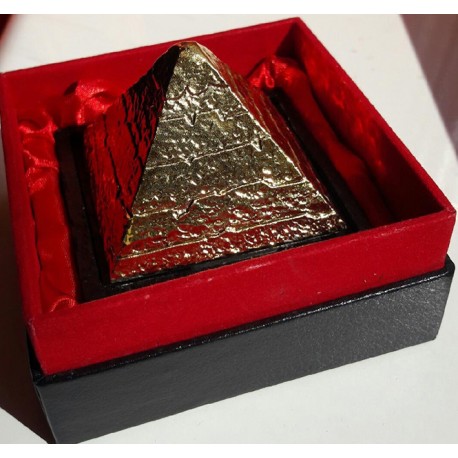 The Cheops' Pyramid neutralizes negative electromagnetic radiation, geopathic radiation and energizes life space. The coverage of Cheops' Pyramid is 24 cm diameter and 2, 5 upward and downward. It is extraordinary product working as neutralizator and negative ions generator. It strengthens our biofield actively and rebalances natural organism's harmony. . It was made due to the newest nanotechnology achievements. It is connection of over 32 minerals volcanic origin, tourmaline and germanium at the molecular level. The health and good feeling depends on harmonious and fettered energy flow in a human body. This knowledge has been known in the ancient cultures like India (called PRANA), China (QI), Polynesia (MANA), Japan (KI). Today quantum physics confirms its working! The most notable scientists like James Maxwell, Nicola Tesla or Albert Einstein were interested in scalar energy. Researches prove that it activates our cells energy, makes them stronger and harmonizes biofield. It works like a bio-feeder and removes effects of bad radiation. All the features of the Cheops' Pyramid come from the integrated working of the scalar energy, infrared radiation and negative ionization.

Tourmaline - it is a valuated semi-precious stone. This crystal belongs to silicates and is mined mainly in Brazil, China and Israel. It is also called "electric stone". It has lots of negative ions and has ability to product electric tension (0,006 mA). Encountered with water, generates electrolyses reaction and reduces water molecule to micro cluster. It naturally emits beneficial infrared radiation, which contributes regeneration and faith healing cells. Tourmaline electrifies easily, attracts negative substance and neutralizes them. It cleans environment up from bacteria. It naturally deodorizes and cleans. This beautiful mineral has strong absorbing features. This natural tourmaline's energy is beneficial for a human body.

Germanium - in 1967 Dr. K Asai collapsed organic organogermanium compound and proved that it has anti edematous features. After that, the interest in germanium raised up. The researches confirmed than various compounds of this element also desensitizes, lows blood pressure, works anti anemic, boosts immunological system and kills bacteria. Because of the features, germanium impacts at some biochemical processes. It stimulates cells saturation of the oxygen (what contributes to better brain working); detoxificates the organism; quickens wound healing; tones up central nervous system;   increases working ability and speeds up regeneration process after hard physical work; tones up immunological system.It is said that 2% of the oxygen we breathe with turns into free radicals. When those free radicals connect with others (generated by heavy metals, chemical substances, bacteria, viruses and positive ions), become more harmful. Negative ions prevent oxidation, neutralizing free radicals in the organism. As the result, cells become revitalized, purified and have higher endurance of oxidation. Negative ions also balance out autonomic nervous system and boost digestion system. They relax brain and mind, reinstate deep sleep, boost metabolism, stabilize appetite and blood pressure. They increase energy level and reestablish comfort. Negative ions are nessesary fo generate goo health state.  The impact of negative and positive ions on our health

It neutralizes negative electromagnetic radiation and energizing life space. The coverage of Cheops' Pyramid is 24 cm diameter and 2, 5 upward and downward.

In a set: Gold Pyramid made from 32 minerals, Cheops' replica in the box with stands and resin pellets to pour under the Pyramid! You can get better effects, positioning Pyramid with a support of compass. You can use it to sleep improvement, meditation and recuperative powers regeneration. Products are save and don't cause any side effects. There are no contraindications in using.